The Estelle Lebowitz Endowed Visiting Artist program affords the University community and general public the opportunity to view the work of a renowned mid to late career contemporary woman artist. During each academic year, the selected artist presents a curated solo exhibition in the Mary H. Dana Women Artists Series Galleries. In addition, the artist delivers a public lecture and engages with faculty and students during a short residency. The program was endowed in 1999 by Professor Joel Lebowitz, Director of the Rutgers Center for Mathematical Sciences Research, in honor of his late wife, artist Estelle Lebowitz.

Find us on Academia to view Lebowitz publications or Vimeo to watch Lebowitz lectures.
Publications and lecture videos are not available for all years.

*Artists selected by invitation only.
Endowment secured under the leadership of Ferris Olin, Distinguished Professor Emerita at Rutgers University. 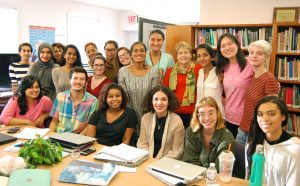 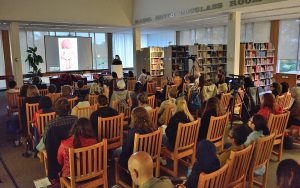 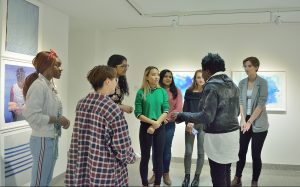 Muriel Hasbun constructs contemporary narratives and establishes a place for dialogue where individual and collective memory spark new questions about identity and place through an intergenerational, transnational and transcultural lens. Hasbun’s work is in numerous private and public collections, and she is the director of laberinto projects, a transnational, cultural memory and education initiative fostering contemporary art practices, social inclusion and dialogue in El Salvador and its U.S. diaspora.
murielhasbun.com

María Magdalena Campos-Pons’ works investigates themes of history, memory, gender and religion and how they inform identity. She addresses Postcoloniality and the complexities that entangle the narratives and connections in a manner that speaks to an ancestral knowledge and tradition. She is currently the Cornelius Vanderbilt Endowed Chair of Fine Arts, Vanderbilt University. Her works are part of over 30 museum collections and she is represented by Gallery Wendi Norris in San Francisco, CA.
gallerywendinorris.com

Judith K. Brodsky’s works incorporate historical and contemporary iconography, one that is often ironic and sometimes humorous, reflecting the intellectual, political, and social issues of the present world. She is a Distinguished Professor Emerita in the Department of Visual Arts, Mason Gross School of the Arts, Rutgers University. She is also the founding director of the Brodsky Center and co-founding director of the Institute for Women and Art (now the Center for Women in the Arts and Humanities).
jerseyarts.com

Mimi Smith graduated with her MFA from the Visual Arts Department at Rutgers in 1966 when the program was located on Douglass Campus. She is a pioneer in early feminist and conceptual art focusing on clothing sculpture and drawing installation, and attributes her time at Rutgers to this development in her work when clothing and materials became both subject and form.
mimismith.com

Laura Anderson Barbata has worked primarily in the social realm since 1992. Barbata’s work uses art and performance to encourage social justice by documenting traditions and involving communities in her practice. She has initiated collaborative projects such as The Repatriation of Julia Pastrana, Transcommunality, and Interventions in Amazon of Venezuela, Trinidad and Tobago, Mexico, Norway and the USA.
lauraandersonbarbata.com

Chitra Ganesh’s work addresses buried narratives. Her imagery is drawn from a broad range of references spanning from mythological iconography, portraiture and fairytales, to more contemporary cultural references such as Bollywood, Anime and comic books. She is represented by Gallery Wendi Norris in San Francisco, CA.
chitraganesh.com

Ariane Littman uses aerial, road, historic, and closure maps to address the various borders, checkpoints, barriers, and road networks throughout the West Bank and Jerusalem. Her work as a freelance photojournalist has influenced her artistic practice.
ariane-littman.com

Audrey Flack is a pioneer of Photorealism. Using her face or photographs of goddess sculptures as a base for her pieces, her later work focuses on the philosophical aspects of the mystical and the myth and how that can be used to empower women.
audreyflack.com

Joan Snyder is a graduate of Douglass College (BA, 1962) and Rutgers (MFA, 1966). She is also the founder of the Mary H. Dana Women Artists Series at Rutgers. Throughout her career she has combined oil, watercolor, acrylic, pencil, glitter, fabric, bark, straw, herbs, beads, paper maché and other materials in her paintings to create uniquely fluid surfaces.
joansnyder.net

Cecilia Vicuña is renowned for her “precarious” installations in nature, which address ecological issues. Her work integrates visual art and poetry to bring to light gender and social issues.
ceciliavicuna.com

Renée Cox uses her own body clothed or nude to celebrate black womanhood and criticize a society she often views as racist and sexist. Many of her works incorporate religious or advertisement imagery as a way to open up a discussion into these topics.
reneecox.org

Berni Searle examines the conceptual intersection between personal and social identity as it relates to history, memory, heritage, race, and gender.
awarewomenartists.com

May Stevens outlook on society, and consequentially her artwork, was influenced by the poverty and lack of opportunities for women that she witnessed around her throughout her life.
nmwa.org

Molly Snyder-Fink has been working as a documentary filmmaker for over a decade and has been involved in every aspect of the process from pre to post-production.
mollysnyderfink.com

Miriam Schapiro is known as a leader in two art movements: the Feminist Art Movement and the Pattern & Decoration Movement. Schapiro was a painter, sculptor, and a printmaker whose artwork blurs the line between fine art and craft.
Miriam Schapiro Archives on Women Artists
nmwa.org

Hung Liu’s subjects over the years have been prostitutes, refugees, street performers, soldiers, laborers, and prisoners, among others. Liu’s painting style combines historical photographs with imagery and motifs from Chinese painting, as well as objects like ancient Chinese pottery and bronzes.
hungliu.com

June Wayne’s interest lies in DNA structure, atomic fission and organic chemistry. She helped to pioneer a revival of fine-art print making in the 1960s when she founded the Tamarind Lithography Workshop.
junewayne.gallery

Carolee Schneemann is known for her discourses on the body, sexuality and gender. Her work is primarily characterized by research into visual traditions, taboos, and the body of the individual in relationship to social bodies.
caroleeschneemann.com