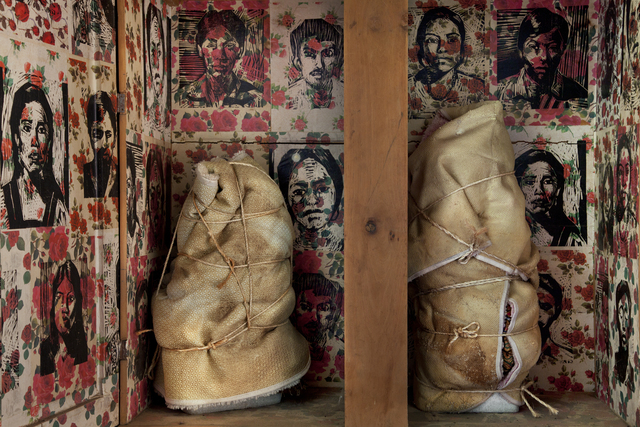 The Center for Women in the Arts and Humanities is pleased to announce that renowned artist Muriel Hasbun, Professor Emerita of Photography at the Corcoran School of the Arts & Design at GWU, has been named the 2021-22 Estelle Lebowitz Endowed Visiting Artist at Rutgers, The State University of New Jersey. The Lebowitz program annually brings to the University community and general public the work and ideas of exceptional women artists through solo exhibitions, lectures, and short campus residencies.

Featuring photographs from various series as well as an interactive installation, the exhibition is curated by Dr. Tatiana Flores, Director of the Center for Women in the Arts and Humanities and Professor in the Departments of Latino & Caribbean Studies and Art History at Rutgers. To accompany the exhibition, CWAH will publish an online catalog featuring an interview with the artist by Flores and an essay by Dr. Erina Duganne, Associate Professor of Art History at Texas State University. Hasbun will visit Rutgers-New Brunswick for an artist’s lecture in Spring 2022.

Born in El Salvador to a Salvadoran-Palestinian-Christian father and a French-Polish-Jewish mother, Muriel Hasbun addresses migration, displacement, and her unique family history throughout her work. Seismic Traces includes a selection of photographs from the series si je meurs / if I die (2015-16), and Santos y sombras / Saints and Shadows (1991-2004), which meditate on the artist’s life and that of her parents. Hasbun’s grandfather migrated from Palestine to El Salvador in the early 20th century, and her family formed part of an expatriate community seen as foreigners even after multiple generations. Her mother, Janine Janowski, was a French Jew whose family fled to Paris from Poland and during World War II, hid in the Auvergne region of France, until the end of the war. Many of her relatives died in the Holocaust and others migrated to Israel, where the family reunited almost half a century later. Janowski herself traveled to El Salvador as a young woman and there met and married Hasbun’s father. She opened a gallery—el laberinto—which was an important cultural space in San Salvador during the years of the Civil War (1980-1992), an armed conflict between a U.S.-backed military government and left-leaning guerillas. Hasbun’s most recent series, Pulse: New Cultural Registers / Pulso: Nuevos registros culturales (2020), engages with the gallery’s artists and the tumultuous context through research in the country’s seismographic record. In the finished pieces, the artist superimposes artworks from the gallery or her own photographs onto the graphs or features the records on their own, in images charged with political subtext.

The site-specific installation in the library’s rotunda, barquitos de papel / paper boats (2006-ongoing), rounds out the exhibition. It consists of photographs of diverse migration narratives folded up into origami boats that the artist has collected through community workshops. She invites the exhibition visitors to contribute their own stories to her archive. The exhibition’s title Seismic Traces refers, not only to Hasbun’s latest series, but also to the turbulence of the process of migration itself and to the medium of photography. The artist’s own memories and experiences as well as her family’s and country’s histories invite reflection from the spectators on the stories that comprise their own identities.

Muriel Hasbun has exhibited extensively throughout the United States and internationally. In addition to numerous solo presentations, she will be featured in “Art for the Future: Artists Call and Central American Solidarities,” a major exhibition curated by Erina Duganne and Abigail Satinsky for the Tufts University Art Galleries in 2022. Her work forms part of distinguished public collections, including the Whitney Museum of American Art, the Smithsonian American Art Museum, El Museo del Barrio, the Art Museum of the Americas, and the Bibliothèque Nationale de France.

VENUE INFORMATION
The Mary H. Dana Women Artists Series Galleries are located in the Mabel Smith Douglass Library (8 Chapel Drive, New Brunswick, NJ 08901). The galleries are free. Hours are Monday through Friday 9am – 6pm and are subject to the university libraries operating schedule. *Rutgers University Libraries are currently only open to the Rutgers Community. Further information about the exhibition, event, accessibility services, and parking can be found at cwah.rutgers.edu. Please direct all inquiries to: womenart@cwah.rutgers.edu.

GENERAL INFORMATION
The Center for Women in the Arts and Humanities (CWAH) is a university-wide unit reporting to the Vice President of Academic Initiatives under the auspices of the Office of the Executive Vice President for Academic Affairs. CWAH is a consortium member of the Institute for Women’s Leadership, at Rutgers, The State University of New Jersey. The Mary H. Dana Women Artists Series is a program of CWAH in partnership with Rutgers University Libraries. It is the oldest continuous running exhibition space in the United States dedicated to making visible the work of emerging and established contemporary women artists.