CWAH collaborates with the Rutgers’ Dance department yearly to present the CWAH Dance Lecture Series, which includes the Dance and Philosophy Annual Lecture and the Dance Studies Lecture. The series is led by Jeff Friedman, Director, MFA Dance Program, Mason Gross School of the Arts. Lectures are open to the general public and all students and faculty who wish to engage more fully with dance. 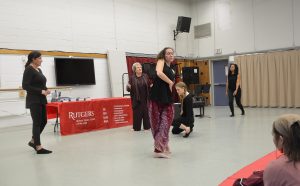 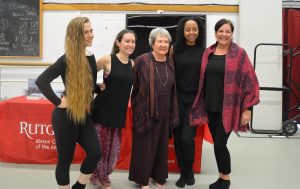 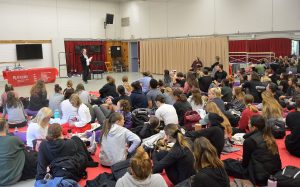 CWAH Dance and Philosophy Annual Lectures* seek to support the continued expansion of dance as both an art practice and an embodied form of creative research that is also embedded in the humanities. The lectures serve students in Rutgers’ MFA Dance degree’s course, Dance Philosophy and Aesthetics and Creative Process: Improvisation Strategies, and is in collaboration with the Rutgers’ Philosophy department.

CWAH Dance Studies Lectures bring nationally prominent women dancers to campus for a conversation with the dance department at Mason Gross School of the Arts.

Natalia Esling is an editor, copy-editor, teacher, and research dramaturg based in Vancouver, Canada. Informed by her background in dance and theatre, her academic work focuses on artistic research, participatory performance, and empirical audience research, which are the foundations of her current book project entitled Experiments in Immersive, One-to-One Performance: Understanding Audience Experience through Sensory Engagement ( forthcoming Routledge).

Halifu Osumare is Professor Emerita in the Department of African American and African Studies (AAS) at University of California, Davis, and was the Director of AAS from 2011-2014. She has been a dancer, choreographer, arts administrator, and scholar of black popular culture for over forty years. She has been recognized as one of the foremost scholars of global hip-hop, publishing The Africanist Aesthetic in Global Hip-Hop: Power Moves and The Hiplife in Ghana: West African Indigenization of Hip-Hop. She is also a protégé of the late renowned dancer-anthropologist, Katherine Dunham, and a Certified Instructor of Dunham Dance Technique.

Katherine Profeta is an assistant professor in the Department of Drama, Theatre and Dance at Queens College CUNY. She has been the dramaturg for choreographer and visual artist Ralph Lemon since 1997, as well as for numerous other choreographers and theater companies. She is also a founding member of the award-winning New York City theater company, Elevator Repair Service (ERS).

Sondra Horton Fraleigh is professor emeritus of the State University of New York at Brockport, a Fulbright Scholar, SUNY Faculty Exchange Scholar, and an award-winning author of nine books. These include: Back to the Dance Itself: Phenomenologies of the Body in Performance, Moving Consciously: Somatic Transformations through Dance, Yoga, and Touch, BUTOH: Metamorphic Dance and Global Alchemy. She was chair of the Department of Dance at SUNY-Brockport for nine years and later head of graduate dance studies. Her innovative choreography has been seen in the United States, Germany, Japan, and India. Fraleigh is also the founding director of Eastwest Somatics Institute.

Ann Cooper Albright is Professor and Chair of the Department of Dance at Oberlin College. She is the author of many publications, and her new book, “How to Land: Finding Ground in an Unstable World”, focuses on contemporary American embodiment post-9/11, and will be released by Oxford University Press in November 2018. Albright is the founder and director of Girls in Motion (GIM), an award-winning afterschool program at Oberlin’s Langston Middle School, and is co-director of Accelerated Motion: Towards a New Dance Literacy in America.

Rose Eichenbaum is a former dancer and choreographer, who has been providing photograph services in dance for the past 30 years. Based in Los Angeles, Eichenbaum has authored 5 books of dance photography, most recently, Inside The Dancers’ Art (2017). Her photography has been the subject of numerous one-woman exhibitions, including a three-year national tour hosted by the Smithsonian Institution’s Traveling Exhibitions.

Aili Bresnahan is Assistant Professor in the Philosophy Department at the University of Dayton. Bresnahan specializes in aesthetics, particularly in the philosophy of art, including dance, theatre and performance, as well as American Pragmatism and the philosophy of law and culture as it pertains to the arts. She has contributed to the Stanford Encyclopedia of Philosophy, the Journal of Aesthetics and Phenomenology, and Dance Research Journal, among others.

Rosemary Candelario is an Associate Professor of Dance Studies at Texas Woman’s University, Denton TX, where she directs the Ph.D program in Dance Studies. Candelario writes about and makes dances engaged with butoh, ecology, and site-specific performance. She is the recipient of the 2018 Oscar G. Brockett Book Prize for Dance Research for her book, Flowers Cracking Concrete: Eiko & Koma’s Asian/American Choreographies (Wesleyan University Press 2016).

Yvonne Rainer is a renowned American dancer, choreographer, and filmmaker, whose work in these disciplines is regarded as challenging and experimental, and often featured the medium’s most fundamental elements rather than meeting conventional expectations. In celebration of the anniversary of her iconic work, Trio A, Mason Gross School of the Arts dance students will perform this “revolutionary” piece in celebration of Rutgers 250th year.